All fishkeepers want the best for their fish, so checking tank capacity is always a good idea. Putting too many fish in too small a space leads to disaster.

This is especially true with Bettas, as they have a reputation for being able to live in small spaces. If you’ve got hold of a 5-gallon tank, a single male Betta is one of the only fish you could keep.

But how many female Bettas can live in a 5-gallon tank? Read on to find out.

In a hurry? Here’s the answer!

You can only have one female Betta fish in a 5-gallon tank. The tank is too small to keep two Bettas together, and you shouldn’t keep females in groups of less than 5. There’s too much risk of one being dominant and bullying the others too much.

It’s usually best to keep Betta fish alone or keep one with other species that don’t threaten them. But some people are really keen on keeping more than one female Betta fish together.

If you do, you might want to know how many you can keep in a 5-gallon tank together. After all, that’s quite a convenient tank size that doesn’t need a lot of room in your home.

Prepare to be disappointed if you were planning on keeping multiple female Betta fish in a tank that size though. Let’s find out why.

So there are two things to consider here. The first is whether a 5-gallon tank is big enough, and the second is whether it’s a good idea to keep two female Bettas together.

The answer is ‘no’ to both, which tells you that this would be a terrible idea. But let’s explore why.

Firstly on the tank size – a 5-gallon tank is big enough for one Betta fish at most. And there are a couple of reasons for that.

No matter how good a filter you buy, and how disciplined you are with water changes, you can’t safely keep the ammonia levels in a 5-gallon tank low enough for Bettas to thrive if there are two of them in there.

There’s just too much poop for you to deal with.

In order to keep the water clean enough, you would have to be doing much larger water changes than is recommended. That’s going to stress your fish out more than anything. You’ll never maintain healthy water parameters for your Betta.

If you have a 5-gallon tank and wanted to keep Bettas, the maximum you could keep would be one. And 5 gallons would be the minimum for a single Betta fish too.

The second point is on keeping females together. The smallest number of Bettas you should keep in a group is five.

Betta fish – males and females – are known for being quite territorial and they can get aggressive. Note the ‘can’ – not all Betta fish will be, and some are quite chilled out.

But all you need is one aggressive Betta fish to cause problems. If you have a group of four or fewer, the non-aggressive Bettas are going to be living in constant stress. This is due to the behavior of the aggressor.

Keeping two together would be a recipe for absolute disaster. If you have one aggressive female, it is going to absolutely torment the submissive one. You’re basically condemning it to a life of anxiety and fear.

Keep two aggressive Bettas together and they’re just going to constantly fight until one of them wins. The other then loses in the worst way possible.

How to manage aggression

Adding more Bettas is key, which is why you have to either keep female Bettas solo or in a ‘sorority’ which should be a group of 5 or more.

That way if you do have one or two aggressors, the punishment that they dish out is at least spread out amongst the other fish, and they will get some downtime.

It sounds awful that this is the best option, but it is. You can’t educate an angry Betta to chill out, it’s just its nature.

So instead you need to give it more targets if you don’t want to keep it alone. At least that way, the other Bettas are getting some respite.

Can you have a male Betta in with a single female in a 5-gallon tank?

In case you haven’t realized it by now, Betta fish are a little bit moody at times when they have to live with other Bettas. But it’s really serious when it comes to males and females.

It is possible to keep a male and a female Betta together if they have the right disposition but there’s a very slim chance of that, and there’s no way of knowing in advance.

You could try it to find out, but you’re gambling with your fishes’ lives and that’s not exactly ethical. It’s too risky.

Even if you could keep a male and a female Betta together safely, 5-gallons is too small for two Betta fish. The ammonia levels would make them ill and eventually kill them anyway.

How big should a Betta sorority tank be?

You may be able to safely keep a small sorority of female Bettas in a 10-gallon tank, but it is recommended to choose a larger 20 or 30-gallon tank for a successful and happy sorority. A sorority should be between 5 and 10 female Bettas – 6 is considered the sweet spot.

You need at least 5 Bettas in the sorority to ensure that any aggression is spread out. More than 10 becomes difficult to manage, and you would need a much bigger tank too. If you can put 6 female Bettas into a 20-gallon tank, you’ve probably got the best combination.

This 20-gallon long will help each of your females find their own space: 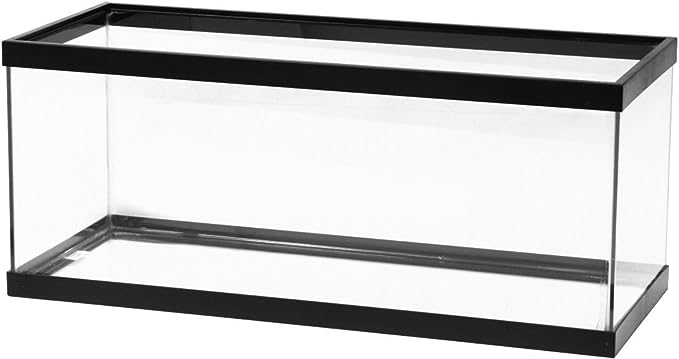 How to have a successful Betta sorority

Here are some things to consider if you want to keep a successful Betta sorority:

Even when you keep the ‘right’ number of female Bettas together, and you have the conditions as good as they can be, sometimes your fish may not be happy.

Living in a group just doesn’t suit some female Bettas.

Thankfully, they often have a telltale sign that you can look out for – horizontal black lines along their body. These are stress lines.

If you see your fish developing these lines, it means they’re anxious even if they appear to be getting along. You need to make a change, and probably separate your Bettas out. Otherwise, the stress will lead to illness.

What a shame we don’t also have obvious ways of showing people we’re stressed, right? Actually, would we want to have lines appearing on our forehead when we’re feeling a bit low? Maybe not.

The key to any happy Betta sorority is plant life. And even if you think you have enough plants in the tank, you probably don’t.

Due to the density of your plants, it should be extremely difficult, if not completely impossible, to see from one side of the tank to the other.

They need space to swim, but much more important is the space to hide. Live plants are better too since they can help to maintain the right water quality.

Betta fish are very sensitive to their water parameters, and they won’t be happy if the conditions aren’t right.

And as I’ve already said, Bettas can sometimes struggle in groups.

So if Bettas can get depressed with incorrect water parameters, imagine the extra stress of the water not being right whilst living in a group.

To keep a happy and healthy sorority, make sure that you carry out regular water changes, but that you’re careful not to cause temperature shock. And use a water testing kit to monitor the parameters and look for unexpected changes.

Ammonia is a key one – more fish means more fish poop, so keep tabs to ensure the water is staying clean enough.

A lot of people like to create vibrant aquariums filled with different species, and it is possible to add some tank mates to a Betta sorority.

But you should only ever add other fish species to a sorority that is getting along OK. Adding extra fish to a tank with a lot of fighting will only exacerbate the issues.

And the fish you choose should be small enough to not cause territorial concerns, or they should be fish that keep out of the way of Bettas. Cory Catfish are a good Betta tank mate for this reason.

You also have to make sure not to add so many fish that the tank becomes crowded.

Are female Bettas good for beginners?

Female Betta fish are not good fish for beginners. They’re temperamental, sensitive to the right water conditions, and can be aggressive with other fish. Male Bettas are similar but not as extreme, so can be OK for beginners if you are committed to the right level of care.

Most people prefer male Betta fish anyway as they are the more colorful of the two genders. Females are less attractive and harder to look after – so definitely a better choice for someone who is used to caring for fish.

What fish can I have in a 5-gallon tank?

A lot of people assume that Tetras would be a good choice for a 5-gallon tank, but they’re too energetic and need more space. Any schooling fish – no matter how small – should have a larger tank too.

Do I need a filter in a 5-gallon tank?

Fish can survive in a tank that doesn’t have a filter but the water will often become murky and will lack oxygen. Most fish will struggle without regular 30-50% water changes, and that could be too much at once for sensitive species. It is better to use a filter.

There are plenty of small filters that you can buy that won’t be too obstructive or too powerful for a 5-gallon tank, and they’ll help to keep the water oxygenated and healthy for your fish.

Do I need a heater in a 5-gallon tank?

You do need a heater for a 5-gallon tank if your chosen fish species needs the water to be a certain temperature. They don’t need to be too powerful – a 25-watt heater will be sufficient for a typical 5-gallon tank.

Buying a 50-watt heater when you don’t need one means you’re wasting an extra $30 every year.

How many liters are there in 5 gallons?

There are 18.9 liters in 5 gallons. It’s important to clarify that US gallons and Imperial gallons are different. A 5-gallon imperial tank would be bigger as it would hold 22.7 liters.

If you want to work out the size of a tank in liters, just multiply the number of US gallons by 3.78. That’s not quite exact but it’ll get you close enough. If you’re a stickler for precision and you want to be exact, multiply it by 3.785411784.

Keeping a Betta sorority tank is a challenge and is not to be undertaken lightly. It’s also expensive.

There are some breeders that say you shouldn’t do it at all, and that the aggressive tendencies of Betta fish mean you’re choosing to subject your Bettas to unnecessary stress.

I’m not trying to put you off – a lot of other people do have success with it, and enjoy female Betta sororities with long and happy lives.

But 5-gallon tanks are not suitable for Betta groups at all. If you want a Betta sorority then make sure to get at least 10 gallons, though I’d recommend only committing to it if you have a 20-gallon tank or more.